People’s constant need to humiliate themselves doesn’t impress me anymore. However, their determination to humiliate their love as well in every possible way still perplexes me from time to time. In this article, I will discuss how much marriage profanes love.

In the past, marriage did not represent love but confirmed legally the relationship between a man and a woman (mainly the financial relationship). Since it does not have a political significance anymore, humanity must have had realized that it has no significance at all. The arranged marriages from the past may not have been wonderful, but they did not pretend to be – they were just a contract and nothing more. Marriage as a symbol of the love between two people is the biggest insult to their relationship.

Now, I will present you one of the biggest dilemmas I have ever faced:

Which is more humiliating:

– your relationship to be approved by the law

– your relationship to be approved by the church?

If neither has happened, it means that the two of you do not love each other and your relationship is less meaningful than those of people who have crawled to the altar and have dived in the slime of the wedding ceremony until hearing the words: I pronounce you husband and wife. It turns out that the government and the church stand above love and it has to ask for their approval. 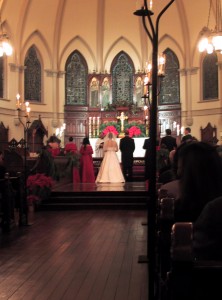 The decision of a couple to marry shows that the two persons need their relationship to be confirmed by someone else. In other words, if the two of them know that they are together and that they will be together until the end, this doesn’t mean anything. But if they announce it to the whole society through their wedding, then it is a sure thing.

Of course, humanity has found two ways to make marriage even more pathetic, although this seems completely impossible. I will discuss them in a single sentence only in order to avoid a nervous breakdown.

The prenuptial agreement – although it wittingly tries to prove that marriage is not about money, the mere suggestion it could be is an insuperable insult to the couple.

The divorce – for God’s sake, if are you going to get married, at least have enough self-respect to make a decision for life.

There is no “before” and “after” in love. You can’t say “I’ll love you only if…”, nor can you escape from love, as it is eternal. This is the last proof that marriage doesn’t have anything to do with love.

My only consolation is that most of the people who get married, do not love each other anyway, so the hundreds of weddings every day are not desecrations of love but glorification of everything which isn’t love.

God is a penis, God is a loser, God is love

How to act on a first date