To protect the weak. To save the inferior. To take care of those who suffer. We often watch the commercial about the selfless hero who lives only to protect the ordinary men. They keep telling us that the highest goal of the individual is to protect weakness. But is that really an honorable mission?

Defending the weak brings up some questions. Why would we do that? Why should we protect the weak? Do we achieve something by doing so and what? From whom are we protecting them? Why some people are weak and others are strong?

Weakness is a stage where progress is absent.  The weak person cannot grow, cannot go further and can never rise above himself. He is helpless. Facing the storms of life, he has two possible choices – to become stronger or to be crushed. And that’s when his saviors decide to show up. But from what exactly are they defending him? From his own decision. Life demands from people to be strong. That is the condition to be born. That you will give the best of you to really live your life. You can either win or lose, but your path will be a worthy one either way. But once your defenders take away your right to lose, they also take away your right to win. Without his losses the man is nothing. When weakness is protected from the blade of reality, it starts to gain control over the individual, destroying his will. When we have protectors, there is no need for us to be strong and the only thing left is a humanoid that calls its own multiplication “society”.

Why should we protect the weak? The man in love is strong. The free man is strong. The maker is strong. The individual is strong. Then why are we protecting a talentless parasite, incapable of deep emotions who exists only as a part of the masses? With this act are we really saving something? Of course not. The strong person can also find himself in a vulnerable position but helping the strong one to stand on his feet is one thing while giving more time to a worm to keep crawling is completely another. If you can’t defend yourself, sooner or later you turn into a shadow. 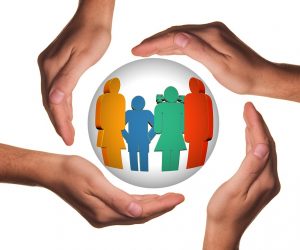 What are we protecting them from? From reality? From the possibility of something new and unexpected happening? From adventures that they are not ready to face? From love? From life? From the chance to achieve themselves or to be destroyed completely? Is there anything more beautiful than this? And if someone is protected from all those things how can he call himself a human?

But far more interesting is from whom are we defending weakness. From the powerful ones, of course. The powerful man is the threat that everyone fears and exactly his destruction is the essence of the “noble mission”. The individual that determines his own rules, wants to shape the world according to his views, fights until the end for his values and lives without any compromises. That’s what the poor ordinary people fear.

When the cheetah chases an antelope, the cheetah is in the position of the strong one. To save the antelope, we have a few options. First one is to kill all cheetahs. They will always be stronger so, in order to secure the peace of the antelopes, all cheetahs have to die. Paradoxically that way the man, being stronger than the cheetah, would have taken advantage, using his superior position to extinct a weaker creature. Then, to save the cheetahs we would have to call the aliens to kill us in order to secure the piece of the big cats. And we can go on like that for all eternity. Our second possibility is to teach the cheetahs to eat zebras but that way we would be just changing the victim. And option number three, which is the favorite of the modern man, is to put all cheetahs in cages so that they won’t be able to hunt anymore. In the end, the spirit of the strong one will be dead and the weak one will be happy, eating grass. Perfection.

But why some people are strong and others aren’t? Chance? Destiny? No. The reason is will. The antelope can outrun the cheetah and survive and the cheetah will die from hunger. The antelope can outsmart the predator or turn around and fight. But if the cheetah chose to be an attacker and the antelope agreed to be the victim, why would anybody defend it and from what? From its own choice? Insanity. Every living thing has the will to be itself and everything in its life depends on it. And the strongest of all is the will of man. The man can be the most pathetic or the greatest creature in the Universe. The man alone chooses whether he wants to be weak or strong. And after he has made his choice he must face the consequences.

Protecting the weak is an unnatural behavior which aims to makes us go further away from our human nature. When a man hides behind walls, he restricts nothing but his own potential. It’s a waste of time to spare ourselves. Reality is merciless and that’s why it learned to give birth to philosophers and gods. To defend the right of the caterpillars to crawl forever is pointless. They must be thrown into a volcano. Most of them will sink in its depths but the falling will turn some of them into butterflies that will fly up, ready to meet the future.