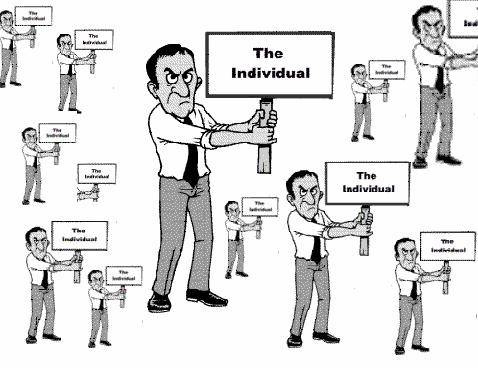 According to many people, the greatest problem of humanity is that everyone thinks only for themselves. I look towards the crowd searching for this unbreakable individualism and cannot find it. If someone knows even one person who says I, please, show him to me because I will have use of him.

Personally, I have not heard a more commonly used word than We. We, the women, want rights. We, the poor, should get social aid. We, from the far-right wing, want to stop immigration. We as a society should fight against crime. We cannot judge. We are simply humans. Where is the individual in all this collectivist trash?!

The accusation of egoism is most frequently heard in the context of corruption. Some politician stole 2 million from the state and did not think about his honest fellow citizens. What a tragedy… First of all, this is not individualism or egoism. This money has been gained through society and crawling before society. Second, if there was not a state, this problem would not exist. Third, yes, this is not total collectivism but here the most logical comment already is “Thank God”.

In the XIX and the XX centuries, there were only a few hundred people who knew what the word I means and only two total anti-collectivists: Friedrich Nietzsche and Ayn Ran. The problem with the fierce egoism does not seem so severe to me.

Let’s make a short balance on what the I and the We have achieved throughout the years and which is more useful for humanity. “I” invented the dynamite and achieved progress in science, “we” used it to kill one another without a reason. “I” started a fight for saving the world, “we” transformed it into the most horrible dictatorship of darkness. “I” went to war to end slavery in the United States, “we” burnt down a perfect world and took what did not belong to them or used their freedom for impudence and violence. “I” painted a masterpiece in the name of beauty and talent, “we” take selfies with it in museums.

If you put the interests of society before those of the individual, you choose mediocrity and need as your measure and condemn everyone to material and spiritual poverty. If you choose your “I”, your main goal will be to make the world better for yourself. In the end, this will contribute to the progress of the whole of humanity.

Perfection is the greatest self-expression

The Neo-Nazi and the Neo-Buddhist: The accomplices in the murder of the world