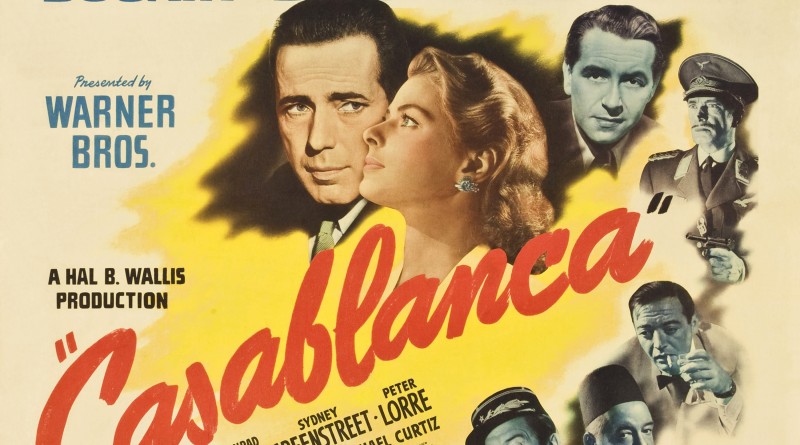 Of course, we can’t expect much from a well-known movie with many awards. But I was still hoping to at least be allowed the luxury to expect the presence of some sense. Unfortunately, I had no such right.

Casablanca is a movie about the Second World War, rebellion for freedom and love. I was a little bit surprised by the fact that neither one of those was present in the film. But I am going to tell what was in there. In „Casablanca“ there was a building and in that building, there was a piano. This piano was played by a wonderful pianist. Even if you want to, there is no way you could find a deeper motive than this one.

In the beginning, we are being introduced to Rick. He is one of those mean and emotionless people, who exist only so that at the end of the movie someone could turn into the good selfless hero. With such an easy recipe, anyone can create an attractive character.

To put it mildly, Rick’s dilemma was truly negligible. He had to choose between betraying the revolution and keeping his loved one with him and giving freedom to the woman he loves and supporting the rebellion. In other words, he was wondering whether to be great or pathetic. And yes, I know that most people would choose to be pathetic, but the dilemma itself is an insult for the proud man and the outcome of it makes no difference. Maybe there would have been suspense, but unfortunately, Rick was a catastrophically predictable man and the result of his inside struggle was clear from the very beginning.

Victor Laszlo. There was no such character. Supposedly he existed, supposedly he was a rebel, supposedly he was a great man. This must have happened behind the scenes because in front of the camera Victor was a completely ordinary man. He walked around, mumbled a few sentences and got on the plain without being of any use whatsoever.

Ilsa Lund. Of course that the world will enounce to be great a movie, in which the woman is an absolute scum. I didn’t expect anything else. But Ilsa wasn’t just pathetic. She was so inventive of new ways to bury herself into the bottom that she almost managed to win my respect. And yet she didn’t.

Ilsa tried to simulate love. Here I was already laughing but to finish the joke scenario, she was claiming, that she is in love with two men. She didn’t love either Rick or Victor and she wasn’t even good at her sham. How she managed to fool the audience is beyond me. But let’s take a look at some of her best moves. 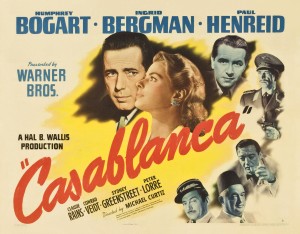 In the past, Ilsa had a relationship with Rick, but she left him at the station, sending him a worthless letter because Victor came home and she was not alone anymore. What kind of a lowlife creature does that? I don’t blame her for hiding from Rick her relationship with Victor. The truth was not a condition for their relationship. But respect and loyalty were. She betrayed Rick and not because of something serious, but because she is spoiled.

But in the present, she got beyond herself. Because she had already betrayed Rick for Victor, Ilsa decided it’s about time to betray Victor for Rick. That’s how she officially won the price „Total worm“.

And what the hell was she thinking, pointing a gun at Rick? HA! Like she has the guts to shoot another person.

Ilsa was a rag doll, that Victor and Rick tossed around with poor interest and every time when she spoke up, was to betray one of them. Few are those who can humiliate themselves in such impressive ways.

And now it’s Captain Louis Renault’s turn. Curious character. He had mastered the art of speaking and there was always something hidden in his words. Only he managed to catch my attention. Louis knew that if you don’t have a reason to risk everything, it is best to side with the winners, whoever they are. But he found his reason – Rick. Although Louis was the impersonation of law and obedience, he let the rebellion inside him to take over. If it wasn’t for his decision, this movie would have been a big bucket of bad boza.

Casablanca tried to speak of love and freedom, but it turned out to be too superficial for these monstrously magnificent motives.

“The Danish Girl” – love beyond definitions

Rammstein – The world with no borders